Infographic: 60 Seconds On The Web

In 1998, there were 26 million indexed pages on the World Wide Web. Fast forward 10 years and there are over 1 trillion unique indexed pages on Google. It is obvious that the internet is growing at a rapid pace. Every hour, there is enough information consumed by internet traffic to fill 7 million DVD’s. Cisco, which releases a Visual Networking Index forecast about the scale of web traffic every year, estimates that by 2015, 966 exabytes (For those wondering what an exabyte is, it’s 1,000,000,000,000,000,000 bytes) of information will be consumed annually by the internet – an increase of 200 exabytes over the estimate for 2014, which is itself more than the amount of all 2010 information consumption online. You can read more about the size of the internet here.

Needless to say, this is not a post about how humongous the World Wide Web is but I couldn’t help sharing some of that fascinating information with you. The real purpose is to show this neat little infographic that was done by Shanghai Web Designers. It illustrates what just happened in the last 60 seconds. And in case you were wondering, over 13,000 iPhone Apps were just downloaded, almost 7,000 pictures were uploaded on Flickr and Google just responded to nearly 700,000 queries. 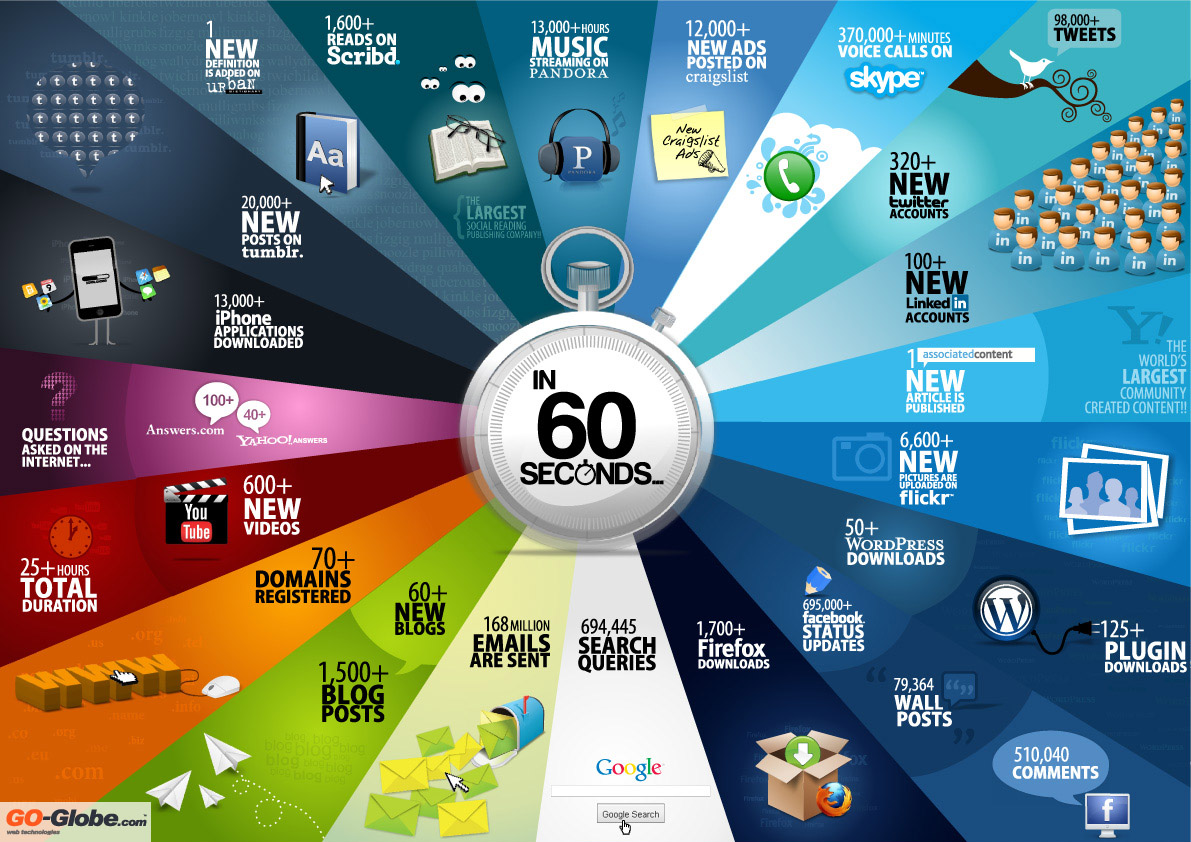 • Search engine Google serves more that 694,445 queries
• 6,600+ pictures are uploaded on Flickr
• 600 videos are uploaded on YouTube videos, amounting to 25+ hours of content
• 695,000 status updates, 79,364 wall posts and 510,040 comments are published on Facebook
• 70 New domains are registered
• 168,000,000+ emails are sent
• 320 new accounts and 98,000 tweets are generated on Twitter
• iPhone applications are downloaded more than 13,000 times
• 20,000 new posts are published on Tumbler
• FireFox is downloaded more than 1700 times
• WordPress is downloaded more than 50 times
• WordPress Plugins are downloaded more than 125 times
• 100 accounts are created on LinkedIn
• 40 new Questions are asked on YahooAnswers.com
• 100+ questions are asked on Answers.com
• 1 new article is published on Associated Content, the world’s largest source of community-created content
• 1 new definition is added on UrbanDictionary.com
• 1,200+ new ads are created on Craigslist
• 370,000+ minutes of voice calls done by Skype users
• 13,000+ hours of music streaming is done by Pandora
• 1,600+ reads are made on Scribd, the largest social reading publishing company

Why Artists, Designers And Musicians Should Pay Attention To Social Media

Here at Bright Oak, we’re big fans of both social media and design. It’s kind of our thing. But there's a reason why creativity offline should be carried over into the online space, and it's more than just the ability to make an extra buck. Proper attention and cultivation of an online presence can make a big difference.

We’re rounding up what the changes really mean, and answering the questions you’re really thinking: Does this better help me avoid embarrassment and social creepiness? Good news, reluctant sharers: Facebook’s new changes are one teeny step towards a creeper-free future.