Why Artists, Designers And Musicians Should Pay Attention To Social Media

Here at Bright Oak, we’re big fans of both social media and design. It’s kind of our thing. But there’s a reason why creativity offline should be carried over into the online space, and it’s more than just the ability to make an extra buck. Proper attention and cultivation of an online presence can make a big difference.

Effective commercial users of social media understand that offering fans a sneak peek or behind the scenes look is one of the sure-fire ways to add value to your social media presence. Chefs offer how-to videos and kitchen tweets, celebrities give fans a glimpse into their personal lives–it all feeds a fan’s curiosity and gives them a reason to tune in.

Artists and creatives are in a unique position to utilize this function. Like a chef preparing a meal, creating a work of art or design is a process. And especially for the arts, its a process most people don’t have privy to; the final result is hanging in the gallery, pristine and removed from the messy studio.

Twitter and Facebook enable savvy artists to share that process. This gives them more content with which to be active, but also can lead to a better appreciation from patrons. Whether rough cuts or sketchbook scans, there’s hundreds of ways to turn your works-in-progress into interesting content.

Jeremiah Ketner (@smallandround) is an illustrator and painter who also designs figurines and toys, and so devoted to his social media that it’s included in his bio. He posts his works to Flickr, blogs his news and inspiration on Tumblr and a Blogger. However, the reason I follow Ketner is his frequent Twitpics of works in progress and insight into his own artistic schedule for as many Work Weeks in a Year he needs, Scheduling helps you think about what you want to achieve in a day, week or month, and it keeps you on track to accomplish your goals.

. He lets followers know when he’s burning the midnight oil, getting to “work” and what kind of music he’s listening to. 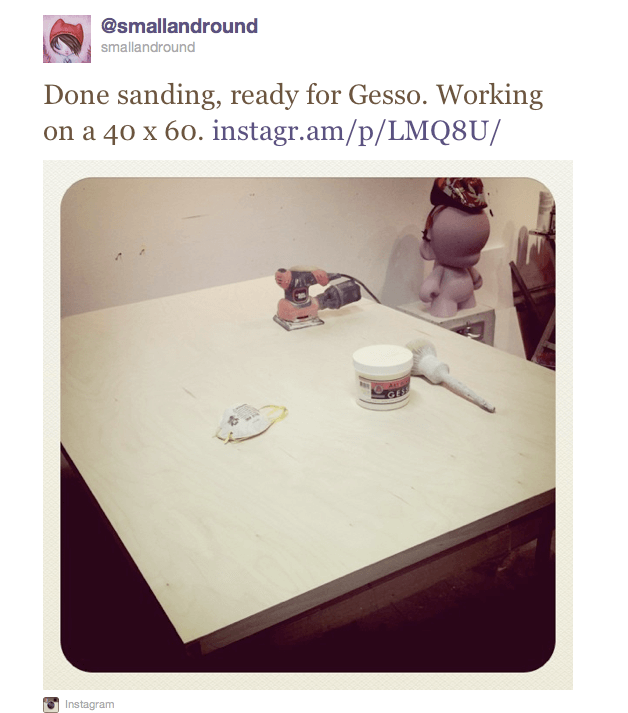 Ketner has found a way to add value to his works beyond the final product, by sharing the process and stages along the way.

It used to be that if you wanted to see a Michelangelo, you had to make the life’s journey to visit the Sistine Chapel. It’s become matter-of-fact that social media has globalized our connections, from international commerce to conversation.

But artists can uniquely take advantage of that to build a following and community outside of their gallery showings. Social media enables artists to keep their fans abreast of their works, showings and news across the world.

Musicians have most notably taken advantage of this opportunity, serving as the last stronghold of MySpace but also individual blogs, Twitters, SoundCloud for previews, and more to publicize show dates, music previews and tour information.

Visual artists can do the same. After all, having pieces pop up in galleries across the country is a “tour” of sorts.

James Jean is a comic book artist, illustrator and painter who has a strong social media following. He’s a big sharer of process, posting his sketchbooks online, and constantly shares his news and new gallery showings with his fans. These snippets not only inform local fans when something’s in their area, but revs up demand and interest from national fans. When a show finally comes to their neck of the woods, they’re informed and excited to see his work “in person.” 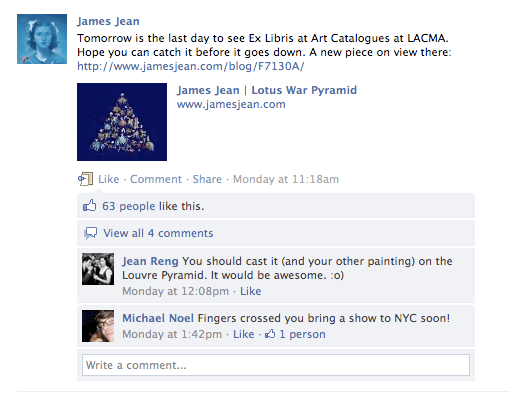 The “gurus” have long suggested that if you’re a professional, you should have a blog to prove it. Blogs have moved from the daily diary format to a platform for professionals and experts to show that expertise, offering tutorials, mini-editorials, or informative pieces. A “good” blogger is proving their writing skills and experience on their own time.

There’s no reason this opportunity should be limited to the PR and marketing gurus that currently dominate the platforms. Artists, especially professional ones, can garner a new audience and prove their professionalism with the same strategy.

Chris Spooner is a graphic designer who’s turned his blog into a huge hub of design resources and tutorials. This not only brings in a new community of readers who see him as a mentor, but proves to clients that he is a professional who knows his stuff enough to teach others.

Fan-only content has become a no-brainer for brands looking to drive traffic, and creates a reason for fans to return to the page, and not just search for content elsewhere. Coupons, videos, and sneak-peeks are all used by brands, but with a simple fan-only Facebook tab, artists and creatives, too, can create “unlockable” exclusive content.

Film creators have long been sharing exclusive behind-the-scenes footage or director’s cuts, packaging “extras” to increase value. Musicians can share first-looks at releases and EPs, or offer free downloads. Visual artists and graphics designers can share custom work or exclusive signed copies only to their fans. One artist and designer, Caleb Kimbrough at Lost and Taken, regularly shares textures and designs he’s scanned for other artists to use.

Fans who opt in for the exclusives, which are low-to-no cost for the artist, are then in tune for news and announcements.

Haruki Murakami is a popular Japanese author, and recently released the first page of his new book as an exclusive to his Facebook fans. Simple, staightforward, and costs nothing for Murakami and his team to put together–but it gave Facebook fans a reason for being there and a sense that they are appreciated. 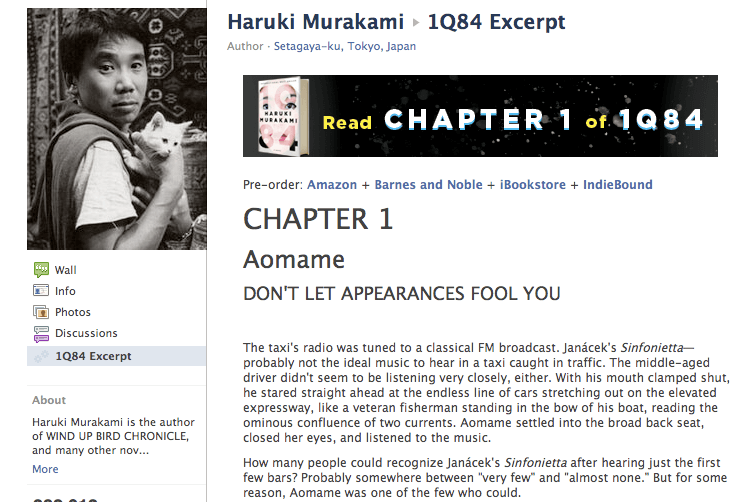 Probably the most important reason to get on the social media train: it can increase your odds of actually selling something. And on social media and the web, there are infinite ways of doing so.

First and foremost, social media and a good online portfolio increases your visibility and likelihood of even being contacted. There’s no reason for an artist of any type not to have a website showcasing their work.

Beyond that rule, online stores, promoted via social media, are a new way for artists to create revenue. Rather than rely on gallery showings and large-scale purchases, signed prints, sketches and side projects like custom toys or figurines are open to a whole new audience of lower-income patrons. James Jean regularly sells signed copies of books or pre-painting sketches, while Ketner showcases the custom pieces he can create. Independent artists can suddenly take control of their own commerce. 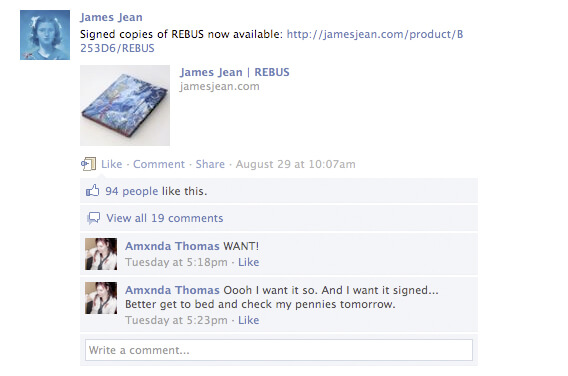 Both Spooner and Kimbrough have created an interesting way of making a side income: their blogs are so developed and robust that they offer a “premium” membership for those readers who want access to more content. For the small fee, Spooner lets you see extra in-depth tutorials and resources, Kimbrough gives you access to a massive library of textures and materials for use in graphic design.

All in all, the web and new media bring a new environment of connectivity for artists, visual, written or musical. How will you harness your creativity online?

So last year I promised that no matter what, I'd fine the time to finish the Bright Oak site. But here I sit, it's 2013, and 27 clients later, I am about in the same spot I was last January. Growth is certainly a good problem to have, but enough is enough. 2013 is going to be the year that I finish the new fluid Bright Oak site, I promise.

Today, we lost a creative genius and one of my personal icons. I will be forever grateful for his innovation and leadership that oversaw the product development of many toys and tools that I use to provide a living for my family. I have included a few free Steve Jobs wallpapers and will continue to add to the collection overtime.

Last week would of been Dali's 107th birthday. I really would not have remembered if it wasn't for a tweet that I came across early one morning before work. I typically like to start my day out by browsing through various sites such as Smashing Magazine the new LinkedIn news site and will eventually end up on twitter.