It’s been about a month now since Apple’s Release of iOS 5 and now that I’ve updated my dad’s phone for him, I feel it’s safe to say everyone has it. Whether you were one of the many of us that rushed to download it at midnight, waiting an ungodly amount of time (one user claims a 37 hour download time), or someone with that thing called self-control and waited for us Apple-addicts to clear up the servers, the question at this point in time is “Are you using it to its full potential?”

We can all clearly see the sleeker notifications, the wireless syncing, and the improved maps that allows us to choose which route we take to sit in traffic for hours (writing from L.A. here), but who really read those 200 new features that flashed in front of the screen before anxiously hitting install?

If you did read and have in fact explored all 200 of the new features, then no need to continue reading. But I’m going to assume most of us haven’t uncovered and experienced them all, so here is my list of five cool (and a few creepy) iOS 5 features you might have overlooked.

The tech savvy already know about geo-fencing as it has been around for over a year now. It has been a feature primarily seen in Androids and a few other lesser smart phones as well as a few apps available for iPhone. However, its integration into the new Reminders app is cause for absent-minders everywhere to celebrate. It allows users to set up reminders based on location, and while it can be used through 3G connections it is much more effective while connected to a wifi network. It’s as simple to use as adding a reminder and setting it to remind you “at a location.” 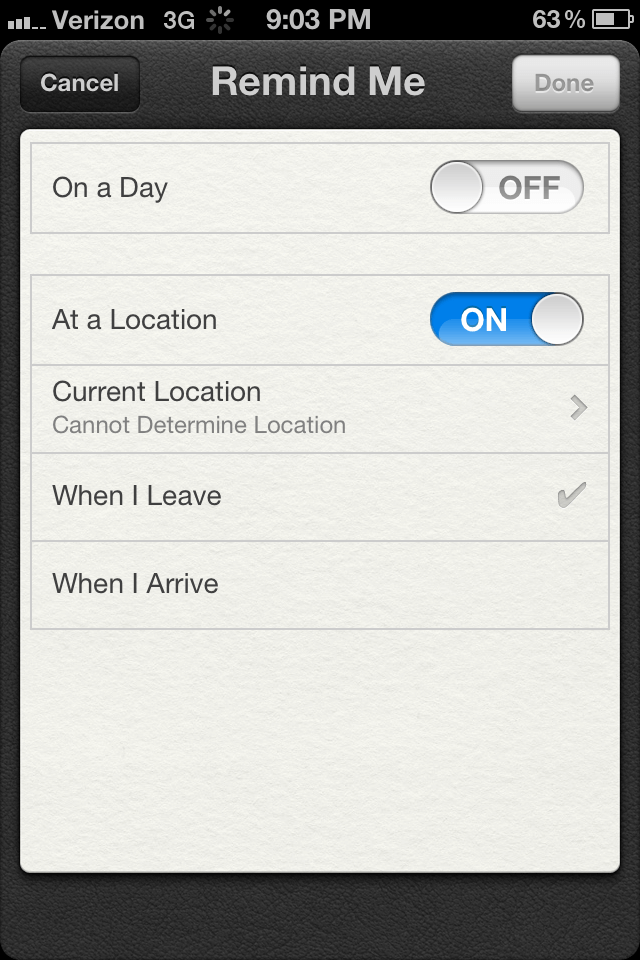 Although the application isn’t precise enough to remind you when going from one room to the next, it can remind you when you leave your house, work, or any other physical address. It can be extremely effective, and users have been remembering to make calls when they leave, run errands on their way out, and more.  Keep a close eye on this feature as I foresee Apple continually making this better.

This is a downloadable app that doesn’t come automatically when you update your phone, which is why I feel people might be missing out on all the creepy goodness it has to offer. Find My Friends is an application that allows you to (with their approval of course) see where your friends are, down to the corner of the office building they’re working in. Pretty creepy, right?

Of course, Apple covered their butts with the ability to turn off location sharing for this program at any time, or to delete users from your friends list to keep them from seeing where you are. This app is especially conducive to creeping on your friends randomly throughout the day and sending them inspiring messages like, “Get out of your house and go do something!” However hard to believe, there are other even more useful features. The event feature is by far the most useful tool within the app; allowing users to set up and send invitations to an event with a specific date, start time, and end time where your friends can see your location during only the hours of the event.

Again, the app isn’t always perfect in regards to accuracy but can be extremely useful for, say, keeping the group together on the occasional pub crawl.

While this is probably the simplest feature of the update, it belongs on this list.  Now instead of fumbling around with the phone (cue black and white extremely exaggerated infomercial clip), unlocking it and seeking out the camera app, it’s as easy as a quick double click of the home button and—POW!—direct access to the camera! This combined with the new ability to use the volume up button on the side of the phone to snap the picture, thus behaving tactically more like the shoot button on a camera, makes using the phone as an every day, rapid-fire camera much easier. 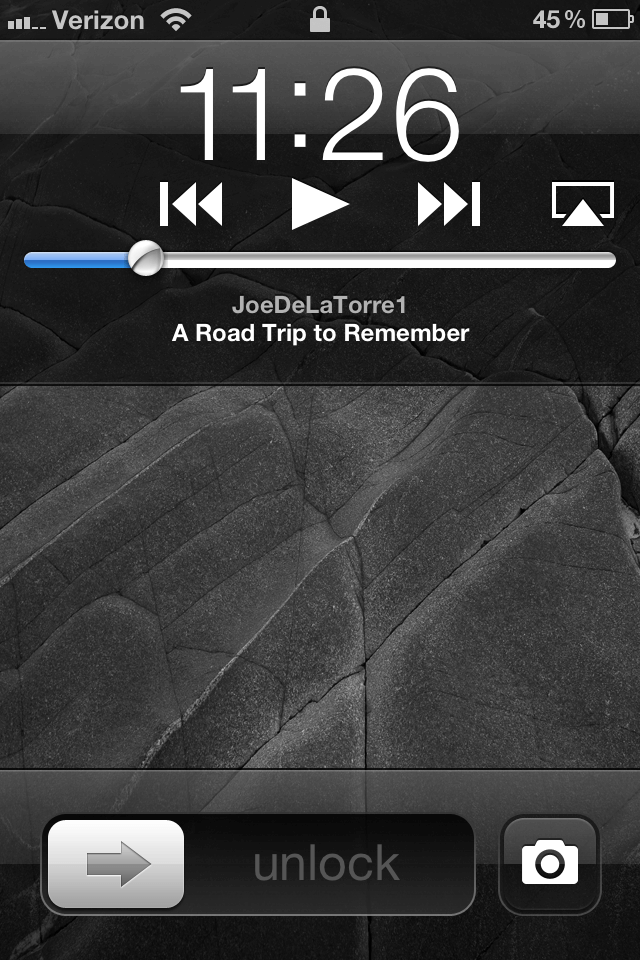 Just as a note, to pull up the camera button from the lock screen you need to press your home button twice while your phone is locked.

Using iMessage allows for a few added features when sending messages to other iOS 5 users. The main one you might have noticed already is this change in color from green (when texting non-iOS 5 users) to blue (texting other iOS 5 users), as well as, the little message that pops up underneath your texts showing that the message was delivered. The new message app also allows you to see when other iOS5 users are in the process of texting—so don’t pretend you aren’t. Another (possibly creepier) feature of the new messaging center is that it allows users to enable a “read” notification that replaces the word delivered underneath texts you send out. If you are rushing to your phone to disable this feature, there’s no need; it isn’t enabled from the get go but is simply an option in the settings menu for the messages app. Lastly, the new iMessage allows users to press and hold down on blocks of texts and have the phone read the texts aloud. For those of us without the iPhone 4S, it’s a little bit closer to knowing what it’s like to have Siri.

GigaOm has a great post on enabling and working with iMessaging.

These little features aren’t quite exciting enough to have their own section, but they’re worth noting. First off is a life-saver for serial app downloaders. You can now change how often the app store asks you to type in your password before downloading. Next, the iCloud enables you to download anything you have ever purchased in iTunes anywhere they have Internet, saving you from losing deleted songs. Lastly, is a simple but pretty awesome feature allowing users to create custom vibrations for each individual contact. It’d be a little insane to do for EACH of your contacts, but for those of us who keep their phones perpetually on vibrate, it’s nice to have a custom “ringtone” of sorts for those special few. In order to enable this feature go to settings, then accessibility, and under “hearing” turn on “Custom Vibrations.” 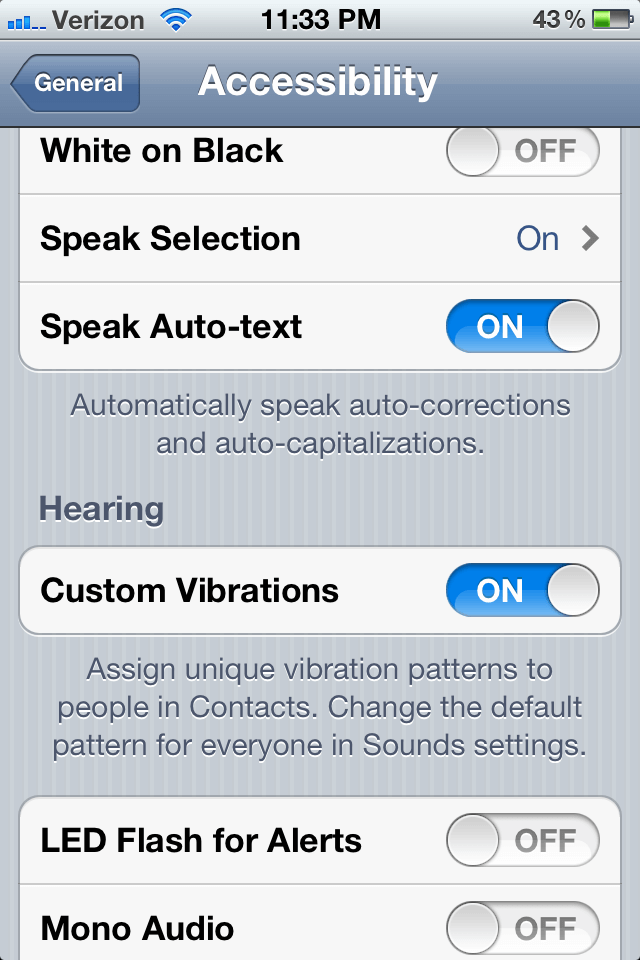 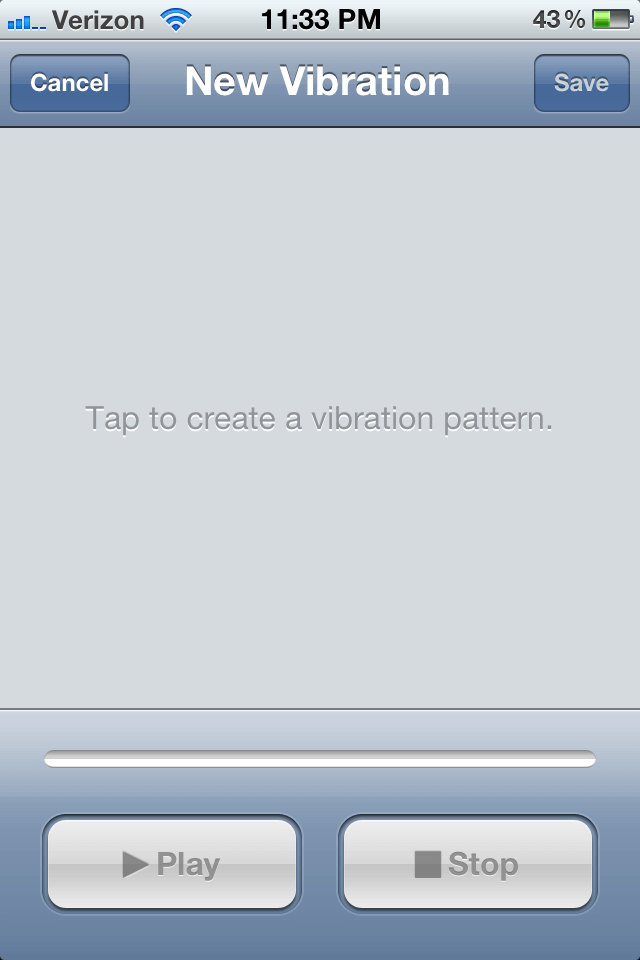 Hopefully, you’ve discovered a little something new to play with, with the new iOS5.