With most traditional franchise operations, the idea was simple. Don’t reinvent the wheel. Instead, use a tested and proven business model and rely on the franchisor to handle advertising at the national level. Your only requirement was to put up the capital and cross your fingers. However, the internet changed advertising as we knew it.

Today, laptops, cell phones, iPads, tablets and other electronic devices have become just as important as television, radio and printed media. To ignore them would be to fall behind the times and hand customers over to your competition. In response, many owners of franchise businesses have had to re-examine advertising at the local level. That’s where SEO service, search engine optimization, comes in.

SEO is a collection of methods and practices to place one website higher in search results than others. The vast majority of online consumers, including those using smart phones, prefer to use search engines like Google to find what they want. They’re typically in a hurry and won’t strain themselves to find you. That’s why it’s important to be listed in the top search results for keywords that people use to find your type of business.

How SEO can Help Your Franchise

If they haven’t already, the national branch of your franchise will most likely be spending money on advertising via SEO. The first thing you should do is check with your franchisor to find out what they’re already doing. Competing for popular keywords can become very expensive, and you may end up spending your own budget unnecessarily competing with other local branches of your franchise. That’s why it’s in your interest to let the national level allocate a budget when possible. That being said, many franchise owners have taken the initiative and benefited by getting in on the action early. Here are three tips to consider:

A landing page is one single web page designed around one or more keywords. While you wouldn’t want to target general keywords for your business, you almost always benefit by targeting specific keywords your customers use to find you. For example, suppose a consumer was looking for a custom home builder in Vancouver, BC. If your franchise were in that category, then you’d want to have a web page specifically designed around the phrase, “custom home builder in Vancouver” and other similar searches. Below is an example of a microsite we built for AlairHomes.com and one of their custom home builders whose franchise is located in Vancouver, BC: 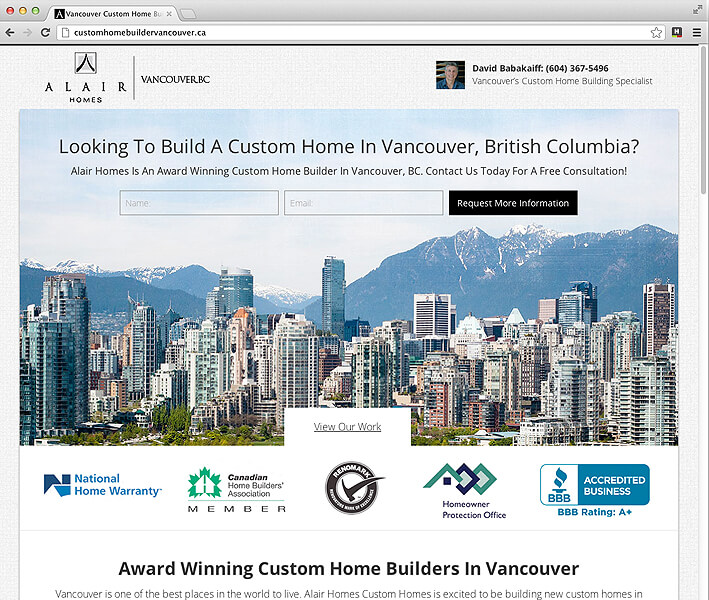 Franchises have benefited from small collections of pages designed for keywords related to the business and location. This handful of web pages often forms a separate stand-alone website, also known as a microsite in SEO lingo. By using a microsite, you can target keywords to then lead consumers back to your main site. Once successful, your independent microsite can likewise be sold as a separate business asset. Should you ever need to discontinue the site, you are able to recover your expenses or see a profit. That’s why microsites have worked well for many franchise owners.

As mentioned earlier, the biggest challenge of hiring SEO professionals like Scott Keever Seo for heavy competition. In essence, you duplicate your effort and make the national franchise essentially compete with itself. That’s why you should stay in the loop for most major SEO decisions made by your company. It tells you what services to engage and those to avoid. You can likewise better advise your SEO professionals on how to proceed. That’s why you need to leave major SEO decisions up to the national level and stay current with them.

Social media is one of those areas where a franchise owner can get in a lot of trouble. Offhand comments about politics, religion, current events and other hot topics have landed franchise owners in hot water because of the national fallout. What may be the personal opinion of an employee or business owner can turn into national headlines that hurt the entire franchise. However, that doesn’t mean you can’t be involved in social media. Instead of running your own independent channels, your franchise may allow you to comment and participate on topics related to your local branch. In this instance, you’re better off limiting announcements to only those relating to your business.

With SEO, the financial rewards to your franchise can be great. However, the pitfalls can be quite risky too. By knowing what your franchise is doing at the national level, you’re better equipped to make well-informed decisions. Look to work with an SEO agency that understands the unique boundaries for franchises, and you’ll be able to realize the benefits while avoiding the risks.

SEO (Search Engine Optimization), or the process of helping your website show up higher in Google rankings is very complicated. Our SEO blog is going to be focussed on sharing our knowledge on the latest Google algorithm updates and overall SEO best practices for all types businesses.

There are a lot of weirdly named Google algorithm updates out there, and we're here to help.

The holiday season is many of our client’s most prime times of the year for sales. For this

Is Google Shifting Its Focus From Organic to Paid Search?

When Google makes any changes to their SERP, there is always a rhyme and a reason for it.And with

Online Reviews Are Growing In Importance For 2017

With more than 88% of online shoppers incorporating reviews into their purchase decisions, business