Pagely vs. Kinsta: 3 Reasons Why We Switched To Kinsta For Managed WordPress Hosting

After years of trying out multiple managed WordPress providers, I think we finally found the one.

If you were like us a couple months ago, you may be scouring the internet hoping to find some feedback or recommendations on what hosts recomendado por wordpress.org you should go with for your agency or freelance gig. If you are also like us, chances are this isn’t your first rodeo either. Over the last 10 years we’ve tried out:

Host hopping fatigue is real and I am hoping this article will help provide some peace of mind as you do one and hopefully final hop over to Kinsta. However, before we jump into this, I am not a developer. This is not a technical comparison of the two services (tho I provide some speed test comparisons at the end), but Rory, our lead developer will be doing a follow-up post to share a developers perspective on what impressed him with Kinsta’s managed WordPress hosting, also there are also other options as well which you can find with the best web hosting Canada in case you want to build a site.

#1: Kinsta’s pricing is way more competitive and you get more for less (where it matters most)

For about 3 years, we were on Pagely’s VPS-1 tier. In order to jump up to the next tier (VPS-2), it was going to double in cost while only offering 85% more site capacity. Below is simplified breakdown of some of the more common selling points most people look at:

Now, you may initially look at that and be like: “more storage, no monthly traffic limits, larger CDN, etc…” but for us, none of all that extra stuff was ever needed or utilized. And if you have a client that needs a lot of bells and whistles, chances are you’re not putting them on a multiple site managed WordPress tier anyways.

So perhaps it is more of a coin toss on the lower tiers (not from my perspective), but check this out: If you want to jump up to the tier that gives you up to 60 sites, this is bonkers…

$300 more a month for a near identical and in some areas, an inferior service!?!?

On top of that, if you do the annual billing (which, why wouldn’t you?) Kinsta gives you 2 months free. I’ll do the quick math for you… that means:

The main takeaway here is that where it matters most (max number of sites and monthly costs), Kinsta clearly outshines Pagely and every other managed WordPress provider — and for some of the tiers — outshines Pagely and others by putting a few thousand dollars in your pocket.

#2: Kinsta’s support is the best we’ve ever experienced

Over the course of the 3 years with Pagely, there were probably 7-10 issues that took more than 24 hours to resolve. The worst one took about 72 hours. And at least 3 of those cases were issues that were 100% preventable with more and better communication as to what they were planning on doing to certain sites.

Now I am not crazy enough to think that even with Kinsta that we will have 0 issues come up. Nobody is perfect. But a big glaring difference with Kinsta’s support team is that you are getting tier 1 engineers working on it. No filing tickets. No waiting 4 to 8 hours — sometimes 24 hours — to hear back. No escalating to a senior engineer if the junior one can’t figure it out. You are talking to the guy/gal who is going to go in and help resolve whatever is wrong.

That alone puts Kinsta miles ahead of the competition but to top it off, they offer this same level of service 24/7. That is unheard of, from what we’ve experienced.

As a quick sidebar, I think the company that Josh at Pagely is trying to build is admirable. He is very much a people first, workers second kind of guy. I respect that, I genuinely do. But if you’re in our shoes, the buck stops with you (the agency, freelancer, etc…). Telling a client who is at a tradeshow or about to get on TV to launch a new product that their site is going to be down until our service provider gets back to work tomorrow morning doesn’t usually go over very well. And then there is thing called price. At some point, unless there is value to justify the cost, price becomes the deciding factor and Pagely just simply could not compete.

In the algorithm centric world we live in, speed matters. If you have 2 competitors that are virtually identical is domain authority, quantity/quality of links, social signals, same usage of structured data etc… and it all came down to the speed factor, Google is going to rank the faster site over the slower site ten times out of ten. Sub 1s load times are the elusive goal we’re all striving to hit, and with Kinsta we are far closer to reaching those goals than ever before. The average website after switching from Pagely to Kinsta loaded about 53% faster then when they were on Pagely and we had one site load 65% faster (see below) — without touching a single thing. Here are a couple random before/after comparisons for you to see yourself: 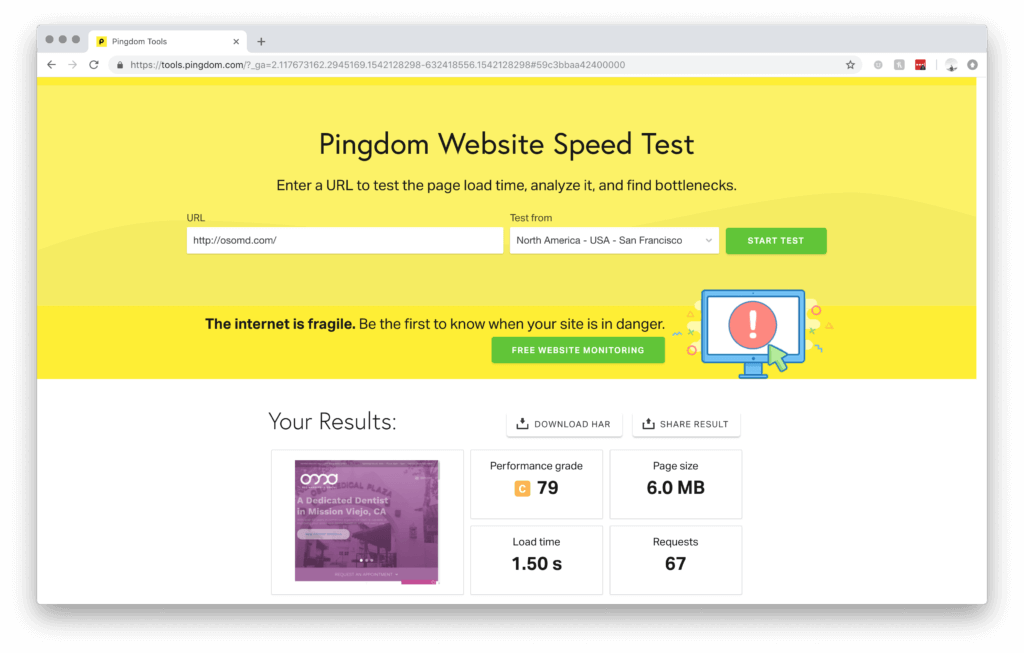 OSOMD after switching to Kinsta: 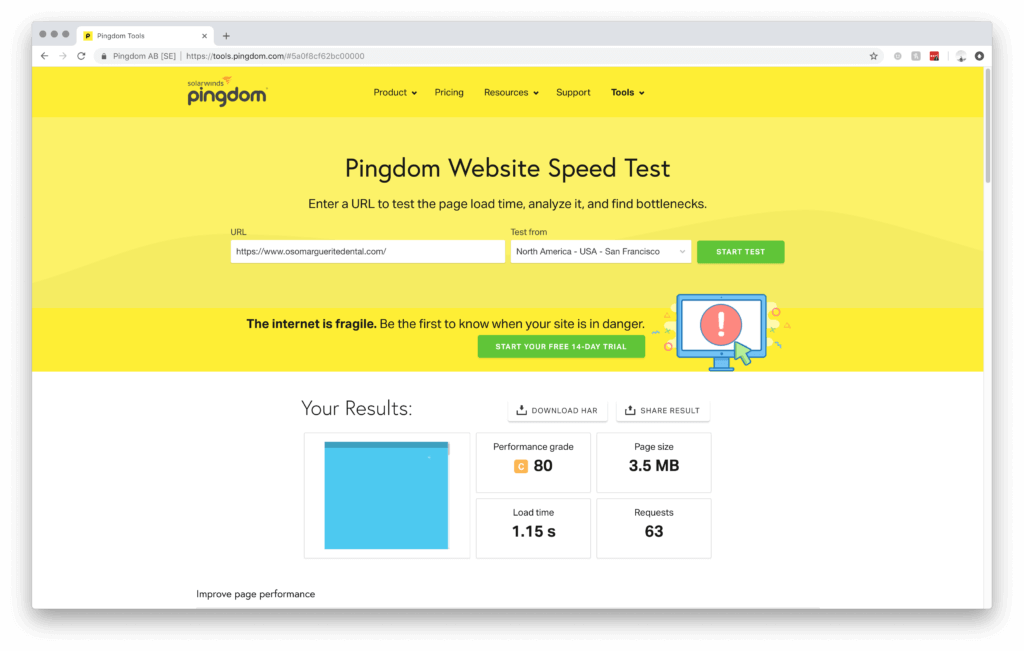 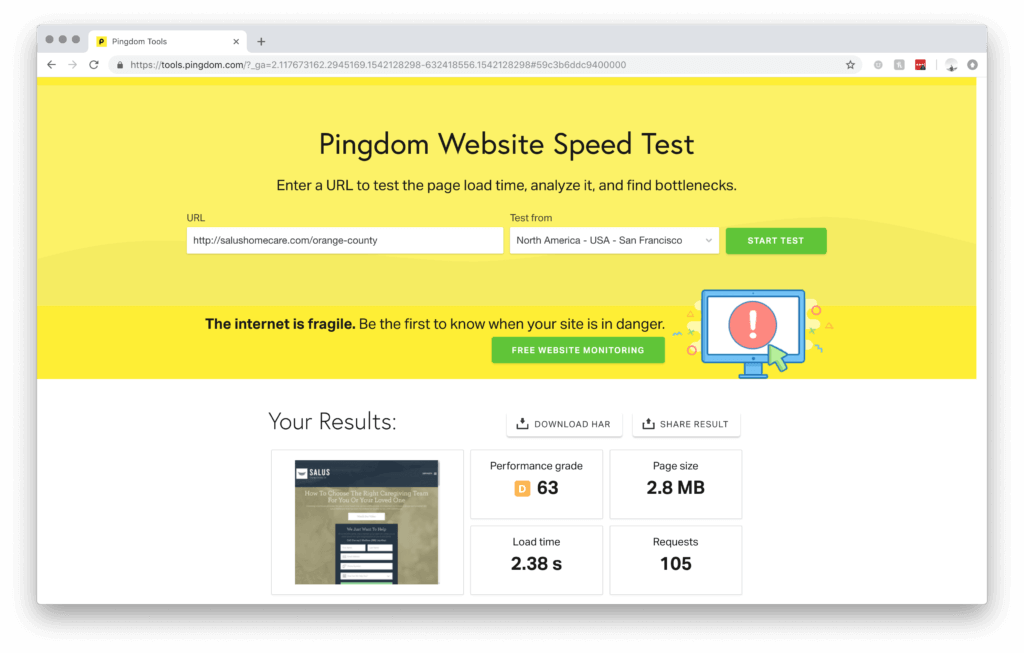 Salus Homecare after switching to Kinsta: 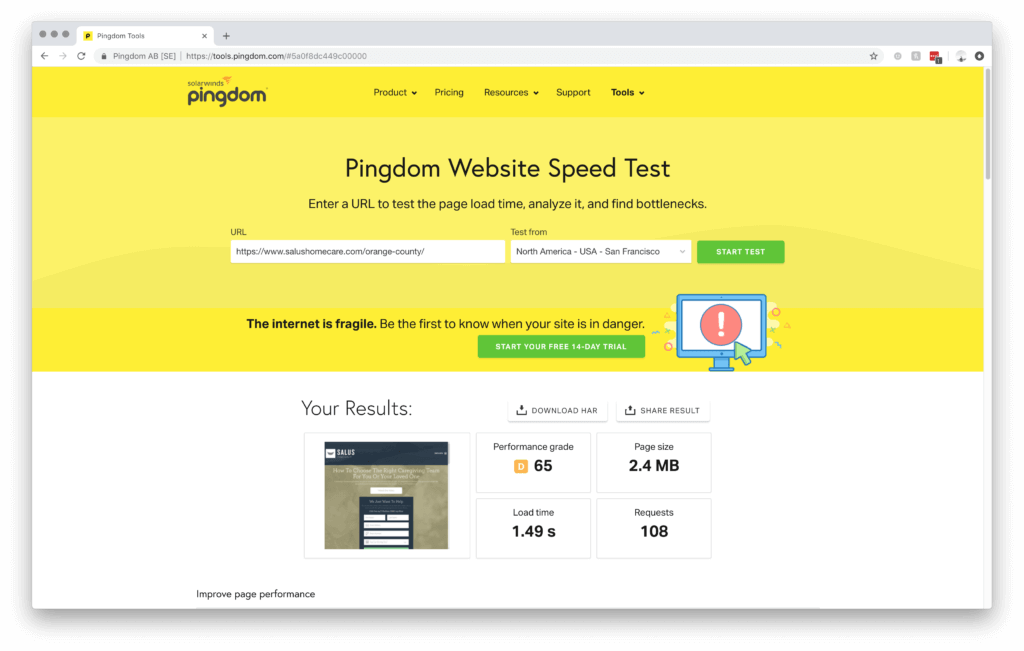 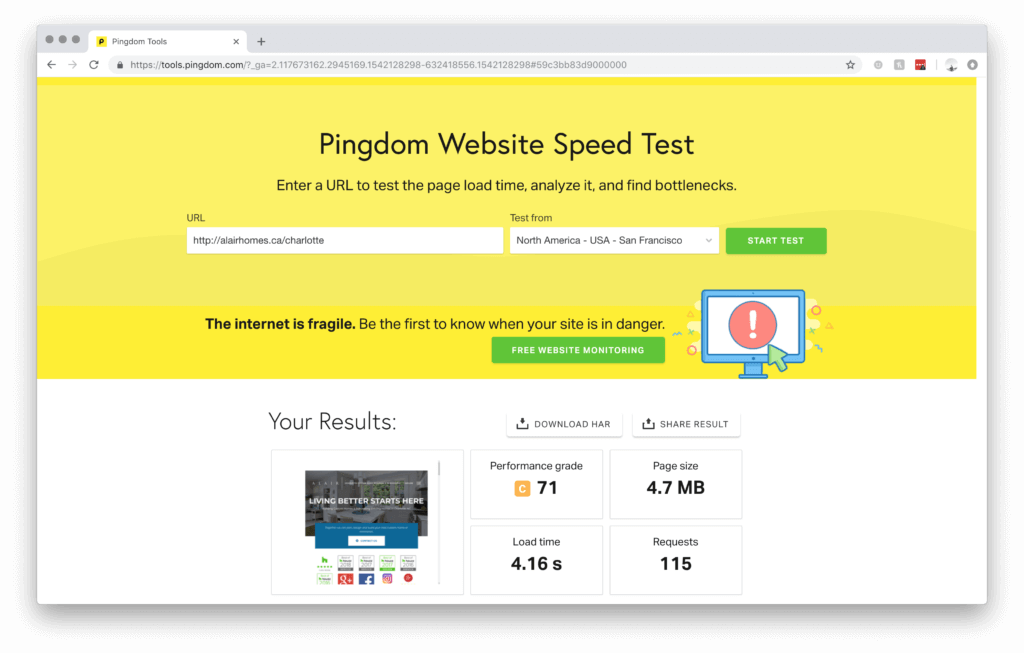 Alair Homes after switching to Kinsta: 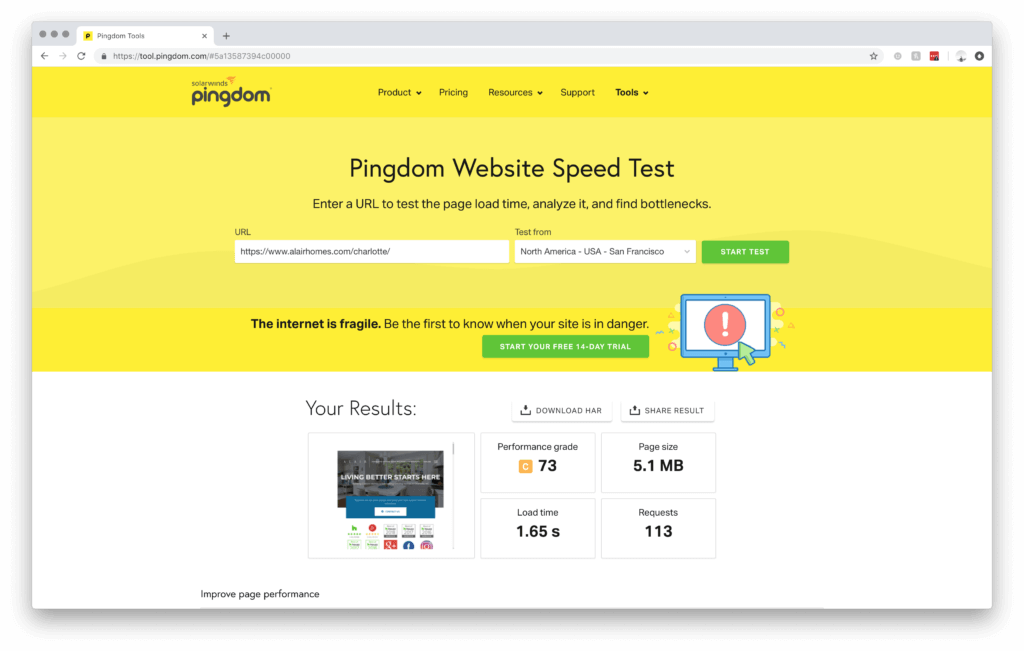 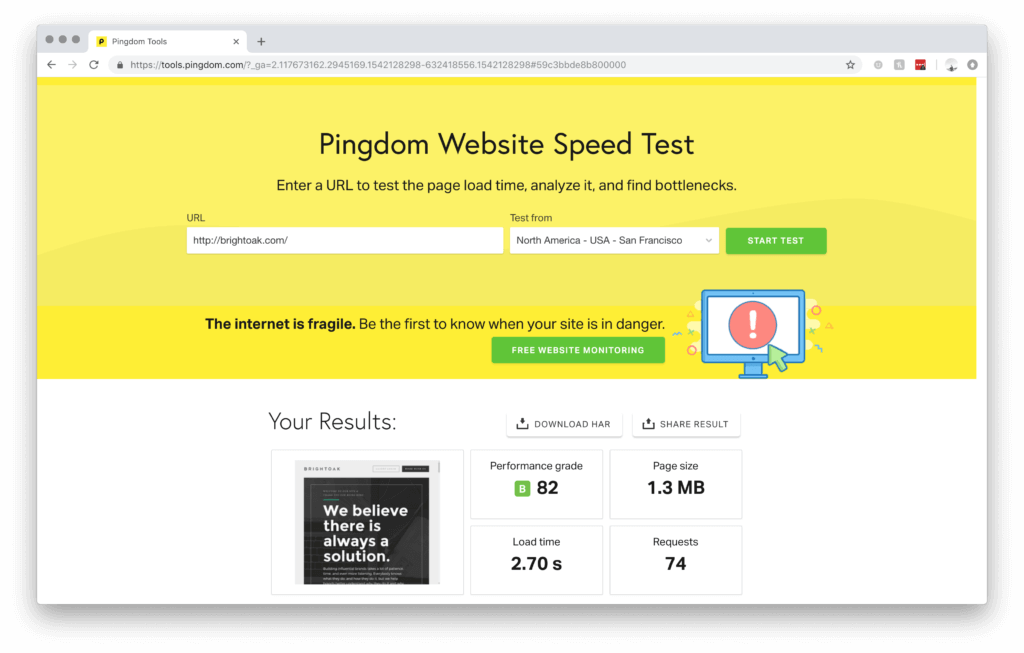 Bright Oak after switching to Kinsta: 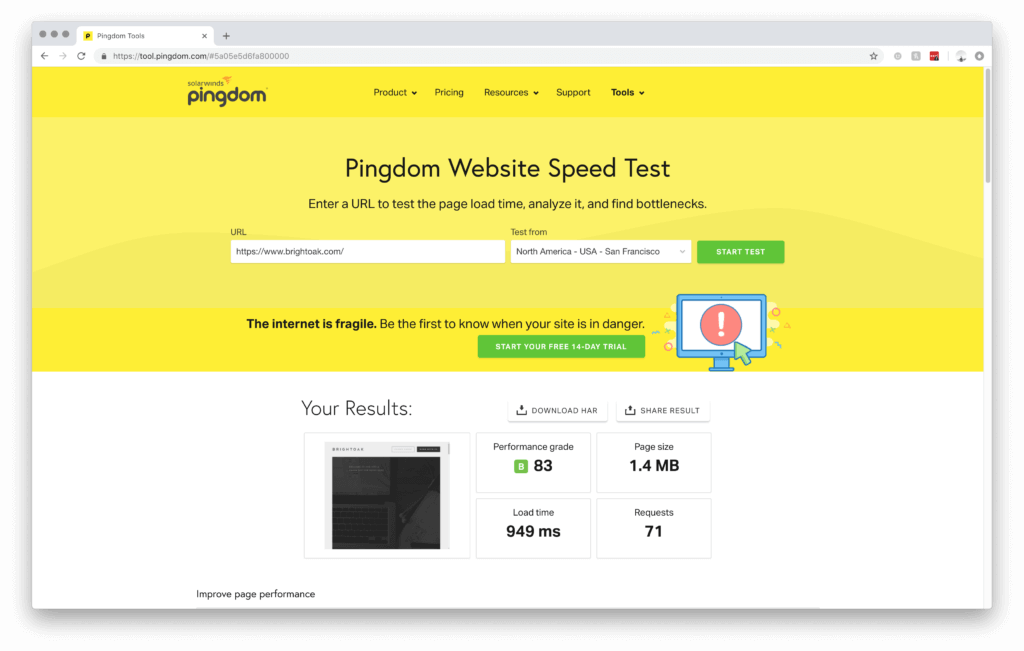 Other reasons you might consider Kinsta as your Managed WordPress Host

Beautifully Designed UX/UI Admin Area
As a designer by trade, I am a sucker for a well designed dashboard UI. Kinsta’s admin area is the best one I’ve ever seen/used to date. However, beautiful UIs don’t always translate over to a solid user experience — yet they’ve managed to check both of those boxes for our team. It’s beautiful, intuitive, and easy to navigate. Can’t ask for more. Check out more of their dashboard design & capabilities here.

Multi-user account permissions
Pagely is getting better, but with multiple developers and scores of clients, Pagely and most managed WordPress hosts haven’t quite figured out how to do this easily. Kinsta allows us to assign developers to 1 site, all sites, throw a clients card on file for billing, and give the client access in the event of a catastrophic event. Likely not deal-breaker stuff, but Kinsta is definitely thinking about agencies more than most managed WordPress hosts out there.

Chose from 18 data centers
If you only have clients in certain parts of the country, the usual east or west coast may be all that matters for you, but with clients all throughout the US, Canada, and Switzerland, having more options is really nice.

Free (and if you have to pay for it, cheap/painless) Migrations
If you are coming over from any of the major managed WordPress hosts Like WPengine, Flywheel, Pantheon, etc… chances are you’re in luck. At the time of writing this, Kinsta offers unlimited free migrations. For us, we had to pay for some because Pagely wasn’t on the list, but it was $40/site (due to our volume) which is way cheaper then it would of been to have our developers handle it.

Overall, Pagely was very good to us. Their team was very friendly and easy to work with over our 3 years together. But when it came time to upgrade, we simply had to make a business decision. For us, and as evidenced in what I laid out above, it was a no brainer for us. You simply get more for less with Kinsta.

Now here is to hoping and wishing and knocking on wood that I don’t have to write another post like this in a couple years!!

If you want to read more about why Kinsta is amazing, click here.

These articles are mostly going to be centered on writing about stuff going on internally here at Bright Oak, about various topics on web design, technology, and overall best practices for marketing. We hope you enjoy them, and look forward to connecting in the comments!

To our dear clients and friends, We’ve got some exciting news to share with you!

The Psychology Behind Successful Client Retention

Whether it is a self-preservation of emotions, moral identity, physical harm, etc. at its' root we tend to use loyalty as a way to protect ourselves.

Bright Oak: The Story Behind The Name

Behind every brand is a story. This article is a window into how Bright Oak got started, how we came up with our name, and what has made us successful.